Ten rail wagons arrive at our Geneva branch every morning. However, the platform only provides space for three-requiring shunting work to be carried out. In summer 2018, employees tested out a hired road-rail vehicle. These are called road-rail vehicles because they are capable of driving both on the road and on rails. Based on the positive results of this test, CAMION TRANSPORT has now acquired a Rotrac E4 from Zwiehoff for the branch.

The new road-rail shunter was presented for the first time on Wednesday morning and was formally given the name Désirée. This name is no coincidence. The desire for a new shunting solution in Geneva had been present for some time. This is why the French name, Désirée, is so fitting; it derives from the Latin word desideria, which means «desire».

The team in Geneva was most excited about operating the machine and getting to know its various functions. As the new vehicle is the same colour as the cabins for our trucks, it matches perfectly with our corporate design.

The Rotrac E4 has even more to offer than road-rail capabilities. Operated entirely by electricity, the machine can be used for eight hours on one charge and features an energy recovery system. With four 37.5 kW drive motors, it is capable of moving loads weighing up to 500 tonnes. The steering system offers 100 percent tracking stability on rails of 1 to 1.7 metres and, using an additional bow roller and precise technology, enables a turning radius of less than two metres on roads. Its boost function ensures a high degree of starting power, while the compressed air brake guarantees efficient braking. Steering is carried out via remote control, which enables the speed to be continuously regulated.

We look forward to seeing how Désirée gets on in practice. 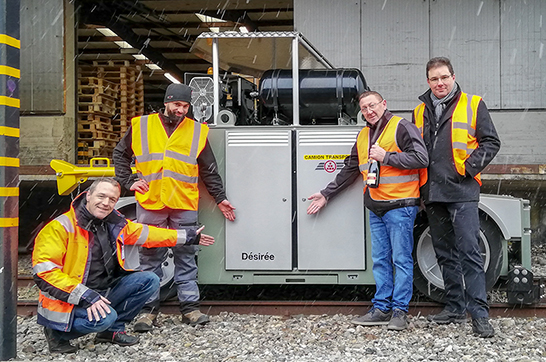 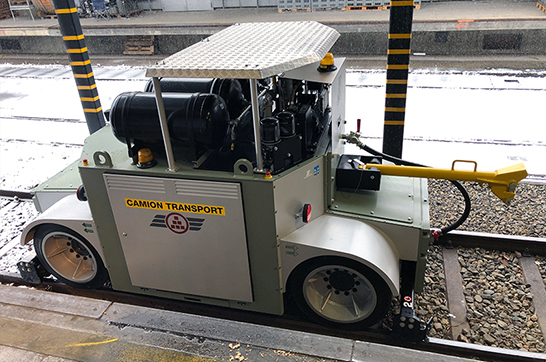 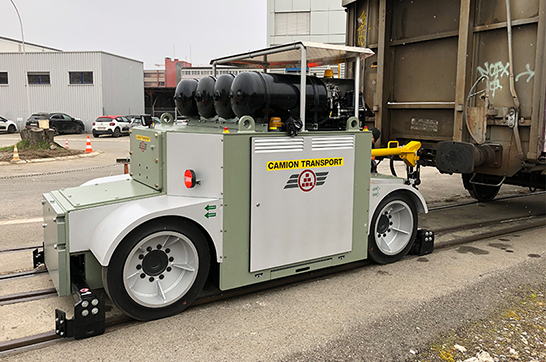